When the Kaunas location of the local Retromobile assocation was closed by local authorities, the club teamed up with the Anykščiai Narrow Gauge Railway Museum in 2019. Now there is a permanent exhibition of historic cars adjacent to the museum

Local technical museum with a few classic cars and motorcycles.

The Lithuanian Road Museum was opened in Vievis on 19 October 1995 in commemoration of the twenty-fifth anniversary of the motorway Vilnius–Kaunas. The museum was established in the very centre of the town at the premises of the state company "Automagistrale", and it covers the area of 1,060 m². The collection of the museum consists of 6,000 exhibits, which reflect the history of Lithuanian road from the Roman Empire up to now. These are models of bridges, viaducts, road intersections, bus stations, production bases and other building and maintenance machines, carts, road signs. 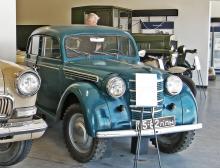 This private museum was opened in 2019, featuring various transport and technical equipment. The museum displays more than 100 cars, trucks, buses, motorcycles, trailers and other vehicles. Also there are old radios, audio, TV equipment and more. 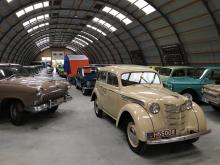 The local Retromobile association has put together a smaller museum in Šeduva, where you can see Soviet-era vehicles.